Monkey Buisness at a road junction, the origin of 'Monkey's Jump'

I have always found place name intriguing, as they always give an insight into the history to a site or place. Audrey Johnson provides this wonderful and amusing tale into the origin of 'Monkey's Jump'

I know I have and after many enquiries am still none the wiser as nothing is registered in the County Archives nor with the Duchy of Cornwall.

A reader from Martinstown set out to find out and has sent me his findings, including this interesting picture. Oliver Duke says that according to local opinions " it appears to be either at the original junction of the turning to Martinstown off the A35 or at Japan Corner, the sharp bend further south towards that village".

Monkey's jump roundabout and the cafe there are recent additions to the area. Several theories about the name orgin have been put forward, including a circus monkey escaped from its mobile cage at that spot or there was once a monkey tree on the site.

Another is the suggestion that it is a corruption of Monkton Gate, bearing in mind that the area is at the north west corner of Winterborne Monkton.

The Most likely is connected with the photograph and came from the late Joy Coleman, nee Williams, of Bridehead, Little bredy. Her Aunt Rhoda was driving a pony and trap from Bridehead to Dorchester accompanied by her pet monkey when the animal jumped out and eluded capture, so it had to be left. Some days later it was seen up a tree and was suspected of being a German spy, so was shot. The story is supported by other members of the family, including Kirsty Creighton from Oxforshire, Aunt Rhoda's daughter, who provided t 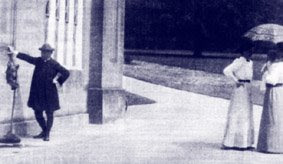 he photograph of the monkey being watched by "Uncle Fred - Fred Wallace, Bishop of Wellington, New Zealand". The two ladies aren't identified.

Oliver says that "the incident occurred probably in 1914 or 1915 whena war was on and everyone was well aware of the German spy meanance, but seeing the size of the monkey it's shooting was rather a feeble excuse."

It appears that the monkey was difficult to house train and when it dirtied in the house they would smack its bottom and put it out of the window, but after a while it still dirtied, smacked its own bottom and jumped out of the window. It appeared to jump once too often. If anyone has anything further to add to this story, or has another suggestion about the name. please towrite to wanderer at the Echo"
Audrey Johnson, The Dorset Echo, April 30th 1997
1 comment:
Email ThisBlogThis!Share to TwitterShare to FacebookShare to Pinterest
Newer Posts Older Posts Home
Subscribe to: Posts (Atom)