37 reports last year in the county 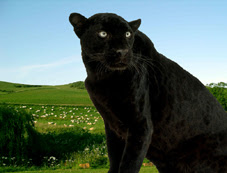 Wicker man to burn at festival

DRUIDS and witches in Dorset are to hold a large pagan gathering near Weymouth to celebrate the festival of Beltane.
The three-day gathering for several hundred people, at a location near Portesham, will take place from May 2 to May 4 - and the highlight will be a fire ritual, including the burning of a wicker man. 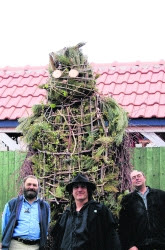 Unlike the sacrificial pyre in the cult film The Wicker Man, Dorset's version will contain wishes and spells which visitors to the gathering will be able to attach before the ritual.
The event is being organised by the Weymouth-based Dolmen Grove and will include music, maypole dancing, outdoor activities, meditation and mystic sessions, the famous Pickled Witch market, circus skills, archery, re-enactments and a bardic competition. Weymouth's pagan folk/rock band the Dolmen will be performing on the Saturday night before the fire ritual.
Early music specialists Rigantona will be organising workshops and demonstrating traditional instruments as well as performing.
Folk duo Heelstone are also among acts lined up for the event. Chris Walsh, arch-druid Melkin of the Dolmen Grove, said: "Beltane is the traditional spring festival of rebirth which is something most people can relate to.
"Anyone who is interested or sympathetic to pagan beliefs will be very welcome. We are hoping that at least 300 people will attend."
There will be camping on the site with facilities, plus food venders. Mead and cider will also be on sale.
Security will be provided by members of the Dagda, a pagan group with considerable experience at festivals and other events. The event has previously been held at a site near Corfe Castle.
Mr Walsh said: "We decided to bring the gathering closer to home for many of our members - the precise location will be announced closer to the event."
Tickets for the Beltane weekend cost £30 for adults with reductions for children. For more details visit the Dolmen Grove website or telephone 07918 143682.
Source: Dorset Echo 9:47am Tuesday 22nd January 2008
No comments:
Email ThisBlogThis!Share to TwitterShare to FacebookShare to Pinterest

Hammer Horror Films - These are the Damned

Damned if we know where Shirley stood

If you have a head for horror or better still can remember the filming of The Damned in 1961, perhaps you can help.

Kevin Flanagan, who sent in these stills from the 60s Hammer thriller film to be identified, said: "Can you identify where they are and if the areas have changed in the following four-and-a-half decades?"

Paul Williams explores the fossils and prehistoric ecosystem of Lyme Regis, on the Jurassic Coast.

Paul Williams explores the fossils and prehistoric ecosystem of Lyme Regis, on the Jurassic Coast.
No comments:
Email ThisBlogThis!Share to TwitterShare to FacebookShare to Pinterest

On the 17th January 1748 in Long Bredy, a burial was recorded of a one William Light of Baglake Farm, Litton Cheney. What surrounded his death was recounted by a Miss M. F. Billington's in her article featured in the Dorset County Chronicle in August, 1883 on " Dorsetshire Ghosts ".
"Bagley House, near Bridport, has very gloomy legends attaching to it. Tradition (for the stories are traced back to the last century) says that 'Squire Lighte, who then owned the place, had been hunting one day, and after returning home had gone away again and drowned himself. His groom had followed him with a presentiment that something was wrong, and arrived at the pond in time to see the end of the tragedy. As he returned he was accosted by the spirit of his drowned master, which unhorsed him. He soon fell violently ill, and never recovered,one of the consequences of this illness being that his skin peeled entirely off. Shortly after 'Squire Lighte's suicide his old house was troubled by noisy disturbances, which were at once associated with the evil deed of self-destruction. It was suggested that the spirit should be formally and duly' laid ' or exorcised. A number of the clergy went therefore for that purpose, and succeeded in inducing the ghost to confine itself to a chimney in the house for a certain number of years,—it is not known exactly now for how long.
" For many years after this, however, the place remained at peace ; but on the expiration of the power of the charm very much worse disturbances broke out again. Raps would be heard at the front door ; steps in the passage and on the stairs ; doors opening and closing. The rustle of ladies dressed in silk was audible in the drawing-room, and from that room the sound was traced into a summer-house in the garden. The crockery would all be violently moved, and at certain rare intervals a male figure, dressed in old-fashioned costume, is said to have made itself visible and walked about the house. The neighbours say that these extraordinary occurrences continued for many years. They believe in them most fervently ; and are of opinion that as long as the house stands it will be thus troubled. An element worthy of notice in this story is the time-honoured faith in the power of the clergy over evil spirits."
No comments:
Email ThisBlogThis!Share to TwitterShare to FacebookShare to Pinterest

Terry is particularly interested in these images that record the changing face of North Quay.

The New Year started with a hearty banging, clashing and shouts of 'Nurdle-Ho!' as our Nurdlers, led by Albert the Tall, set off on their expedition from the Old Ship to the top of the Ridgeway and over the hill cheered on by a goodly crowd on a brilliant sunny morning.

A motley crew of 20 or so they were, clad mainly in sacking and an assortment of odd garments in many colours, equipped with dustbin lids (to catch and ground the nurdle) and grouting poles to bat it about.

The recent sighting of a over the skies over Weymouth (see Mysterious Orange 'Jelly Fish' is reported in skies above Weymouth Harbour) may have a possible explanation.

Printed in todays Dorset Echo is the following article

"A UFO seen above Weymouth Bay could have been a microlight.

Four people were standing outside the Hotel Prince Regent on the
Esplanade when they saw the baffling phenomena. Now retired drayman Joe Bevis, 78, of Horsford Street, Weymouth, thinks he may have the answer.

He said: "It was one of those microlights.

"I was sitting in the Nothe Tavern having a meal. We were right at the
back of restaurant, almost outside, and we watched it go right across.

"It was all lit up and had some sort of illumination.

"We said something like, I bet he's colder than we are and forgot all about it,but now I've read the Echo article about a UFO shaped like a jellyfish I think that might be it." 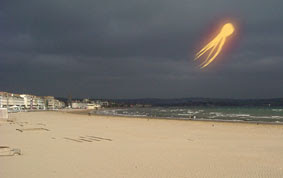 An interesting story reported by Laura Kitching in todays Dorset Echo of a unidentified flying object witnessed by Victor Brabrook, Linda Brabrook and Jean and Philip Palmer. They describe a orange ball of light with a straggling tail resembling a jellyfish rising over Weymouth Bay.


This report reminds me of an incident that was reported in the Bournemouth Evening Echo 22nd October 1969. It was witnessed by Alastair Mackenzie, a manager of the Suncliff Hotel.

Whilst he was drinking coffee with his with wife and daughter, he observed something fluttering outside of the hotel window. They went out onto the veranda and saw something a resembling a glowing jellyfish-like shape. After about fifteen seconds, the luminous object moved out to see gathering speed as it went, at a height of 25 - 30ft.

It has been often suggested that it could have been ball lightning? However no storm was reported that day. Others have suggested it may be a type of animal rather than a alien spacecraft? 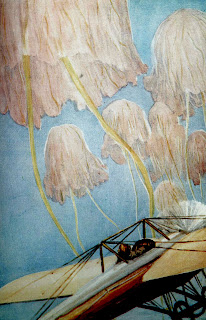 There is much speculation that there are organisms which could hypothetically inhabit the extreme atmosphere of our earth. Sir Arthur Conan Doyle anticipated these ideas in his classic short story Horror in the Heights published in Strand Magazine 1913. Where an airman discovers a previously unknown ecosystem of life forms in Earth's atmosphere, one of which includes a giant ethereal jellyfish.

2 comments:
Email ThisBlogThis!Share to TwitterShare to FacebookShare to Pinterest

Hello and welcome to Dark Dorset Blog brought to you by www.darkdorset.co.uk - Dorset's premier website devoted to local folklore, customs, traditions, mysteries and the unexplained. As this is our first entry and may we wish you all 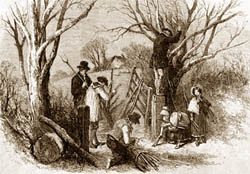 A Happy New Year and a Good Wassail from us .

Last year, on the 17th of January, Dark Dorset visited The Shave Cross Inn, where since 2004 they continue the tradition of Wassailing by burning the Ashen Faggot on the Old Twelfth Night.

The Ashen Faggot (sometimes called ashton fagot) is an old English Christmas tradition from Devonshire and Somersetshire, similar to that of the Yule log and related to the wassail tradition. The wassail party passes around a bundle of ash sticks, twigs or branches—the ashen faggot—bound with green ash withies, which is then placed onto the fire. As each binding bursts, the watchers toast it with a drink. Some traditions had the unmarried women each choosing a withy, and the first one whose tie snapped would be married the next year. When the bindings have all burst and the bundle has fallen loose, each person who plans to host the festivities next year takes one of the half-burned ash sticks and saves it until the following Christmas, when it will go in the center of their own ashen faggot. The tradition endures (or has been resurrected) in many places; according to an article in the Winter 2005 issue of Devon Talk. The Harbour Inn in Axmouth annually builds an ashen faggot six feet high and three feet wide for their huge pub fireplace.Some traditions held are that not burning the ashen faggot in your house brought bad luck, or that having an ashen faggot in the house kept the Devil and evil spirits away. Ash was likely to be chosen because the ash tree has a long pedigree of magical associations: perhaps the most important is the Yggdrasil of Norse mythology, also known as the World Ash Tree.

This year on 17th Jananuary 2008, Shave Cross Inn will be holding the 'Ash'n'faggot' burning once again, with performances by the Wessex Morris Men. Also there will be Music, Dancing and Singing at 7.00pm onwards.