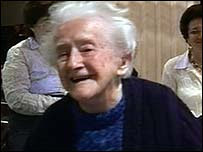 The success of the BBC series Tess has reawakened interest in the novels of Thomas Hardy.

The last living link with Hardy is 102-year-old Norrie Woodhall from Owermoigne.

Norrie, the last of the Hardy Players, has done her fair share of interviews, but until now none have been recorded for posterity on camera. Now a video diary of Norrie has been recorded on DVD and is on sale at Dorset County Museum. The DVD offers a menu of categories: life in Dorchester, World War II and chickens, and Thomas Hardy and the Hardy Players.