'Morris: A Life with Bells On' will be making its television premiere 29th May 2010 at 8pm on UKTV's Blighty channel

The film Morris: A Life With Bells On will be making its television premiere on Blighty this Saturday 29 May at 8pm.

Morris: a Life with Bells on is a heartwarming feature-length comedy shot in documentary format that follows the fortunes of one of the leading Morris teams in the country, Milsham Morris, and in particular those of its leader, Derecq Twist. Morris is a gentle and affectionate look at an aspect of English culture which is, in the finest traditions of this country, unapologetically eccentric, and towards which there exists a huge amount of good will. The film's events take place in the summer months in and around Dorset, and specifically centre around an idyllic thatched country pub, the Traveller's Staff. The film is an unashamed celebration of not only the English countryside but also of what it means to be English. Filmed partly in Poole and Tisbury, Morris boasts a fantastic cast which includes Derek Jacobi, Harriet Walter, Greg Wise and Aidan McArdle.


Be sure to tune into Morris the Making Of to hear the trials and tribulations of filming a California beach in rainy Dorset! That and other production secrets revealed by filmmakers Chaz Oldham and Lucy Akhurst. The documentary will be screened on Blighty after Morris: A Life With Bells On at 10pm.

Read More: All about Morris, but we're afraid to ask - Blighty
No comments:
Email ThisBlogThis!Share to TwitterShare to FacebookShare to Pinterest

The display will include hundreds of fascinating old archive photographs and will appeal to anyone with an interest in the history of the town.

Lyme Regis Museum is holding the exhibition during half term, Saturday, May 29 to Sunday, June 6, at the new Malthouse at the Town Mill complex. 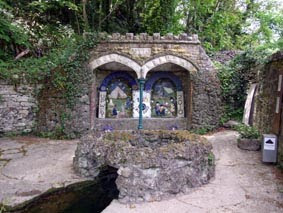 This is the 24th Upwey Well Dressing and this year the display marks the centenary of the Girl Guides movement, depicting scenes of camping past and present..

Well dressing was introduced to Upwey in 1986. Some Derbyshire Ladies who moved to the area started the tradition of dressing the well, as per Derbyshire custom. Thus The wishing well is now dressed each year at around May Day. The Upwey Well Dressing is very much a community effort, which raises good money for local charities, this year proceeds will go to the South Dorset Girl Guides.

The origins of the tradition are alternatively said to lie in pagan tradition or in giving thanks for the purity of the water drawn from certain wells during the period of the Black Death. It is often said to have originated in Tissington, Derbyshire, though other claims can be made for Eyam and Stoney Middleton. Whatever its origins it was historically a custom exclusive in England to the Peak District of Derbyshire.

Springs and wells all over the world have been revered since ancient times. In Britain the most famous examples of this tradition are Well Dressings in the Peak District villages of Derbyshire, where, during the time of the plague, communities with fresh water supply were able to protect themselves by sealing their village off from sealing their village from the outside world. Weymouth is were the Black Death entered the country in 1347. Since then wells and springs were dressed annually in thankfulness and celebration.

Here at Upwey Wishing Well is the main source of the River Wey - the largest natural spring in the south - and local people with Derbyshire connections introduced Well Dressing to the local community in 1986. Ever since the Wishing Well has been dressed annually at the May Day weekend.

Planning and designing takes several months but work starts in earnest during the week leading up to the May Day Bank Holiday.

First, a wooden framework is made and soaked for a week or so in the water gardens. Then, in the week before installation, a layer of clay is laid out on the framework of boards and the design marked out. Over the following three days the picture is built up with leaves, seeds, and other natural materials. Finally, on the day before installation, thousands of flower petals are added to give brilliant colour. Local gardeners are very generous and no wild flowers are used. The work is very intensive and painstaking and has to be completed within this short period. Although it is at its best in the early days, the Well Dressing last for three to four weeks."

Brief History of the Wishing Well

The Wishing Well at Upwey is a natural spring 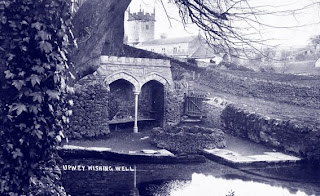 and source of the River Wey. The tradition as a wishing well is said to have begun as a visitor attraction in the early 20th century.

Visitors would often participate in the ritual by taking a few sips of well water from a glass. And throwing the rest of the water backwards over their left shoulder while wishing.

George III often visited the village of Upwey during his stay at Weymouth. He was particularly attracted by the spring that it is said that this caused a seat to be set nearby for his use. It is also said that the gold cup that the king drank the spring water from later became the Ascot Gold Cup.
No comments:
Email ThisBlogThis!Share to TwitterShare to FacebookShare to Pinterest 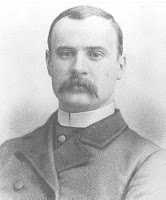 Members of the Society of Dorset Men paid tribute to their founders in Dorchester.

They gathered in the Dorchester cemetery to honour William Watkins and Sir Frederick Treves.

Mr Watkins founded the society in 1904 and Sir Frederick became its first president.