Merrily Harpur will be giving a talk about big cats in our countryside, at The Bridport United Church, East Street, Bridport on Friday 5th October 2012 at 7.30pm

Merrily, who runs the Dorset Big Cat Register www.dorsetbigcats.org -  has researched thousands of sightings of anomalous big cats (ABCs) roaming Britain.  Sightings of these mysterious felines, described as being like pumas or panthers, are higher in Dorset than any other county in England.

Meeting or glimpsing a Big Cat could, Merrily suggests, be the nearest we get in Britain to a ‘brush with the unknown’.   She discovers that these mystery felines have been with us for longer than we imagine, in folklore and familiar to the Neoplatonists as daimons (not demons) – intermediaries between this world and another. They may ‘at the very least change your view of a landscape that can produce such beautiful and elusive creatures’. 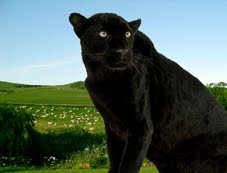 Merrily Harpur is a freelance cartoonist, illustrator and writer and has contributed regularly to many national newspapers and magazines.  Living between Dorset and Ireland, in 2002 she created the Dorset Big Cats Register, a gazetteer of locations and eyewitness accounts.