Weatherlore: Once in a Blue Moon 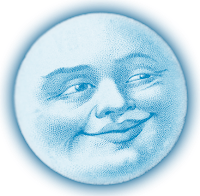 Tonight you may be lucky to witness a August 'Blue Moon'

When two moons occur in a single month, the second one is commonly called a ‘Blue Moon’. The second full moon doesn’t actually look blue, yet it could have possibly acquired the name ‘Blue’, being the colour of water. as the old saying goes ‘Two full moons in a calendar month bring on a flood’. And ‘Two moons in May mean rain for a year and a day’.

A Blue Moon takes place about every two or three years hence another common saying: ‘Once in a Blue Moon’. A second new moon in a month is called a ‘Black Moon’ and is considered doubly lucky.