Ghostly Goings On: The Traditions and Legends of St. Mark's Eve 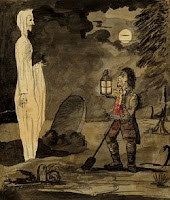 Saint Mark’s Eve, tonight all the souls or wraiths of those who are destined to die over the next twelve months go walkabout, turning up at the church in which they will be buried.

With so much paranormal activity tonight, it is appropriate that anyone born on St Mark's Eve can see spirits. Not only that, but they are also blessed with a startlingly useful ability: the power to see the stars at midday.

St. Marks Eve was once a prize night for lovesick girls wishing to discover their truelove by supernatural means. Any inquisitive girl would place a hazel nut amongst the hot embers of the hearth, naming it after her sweetheart and say:

If her boyfriend was destined to be her husband the nut would jump away.

Another popular love divination required the girl to hang up her smock by the fireside and quietly sit naked and alone in the darkness. If the ritual was performed correctly, the inquisitive girl would be rewarded at midnight by seeing the wraith of her future husband appear and turn the garment.


On Saint Mark’s Eve, at twelve o’clock,
The fair maid will watch her smock,
To find her husband in the dark,
By praying unto good Saint Mark.


The Traditions and Legends of St. Mark's Eve

'Tis now, replied the village belle,
St. Mark's mysterious eve,
And all that old traditions tell
I tremblingly believe;
How, when the midnight signal tolls,
Along the churchyard green,
A mournful train of sentenced souls
In winding-sheets are seen.
The ghosts of all whom death shall doom
Within the coming year,
In pale procession walk the gloom,
Amid the silence drear.'

In the northern parts of England, it is still believed that if a person, on the eve of St. Mark's day, watch in the church porch from eleven at night till one in the morning, he will see the apparitions of all those who are to be buried in the churchyard during the ensuing year. The following illustration of this superstition is found among the Hollis manuscripts, in the Lansdowne Collection. The writer, Gervase Hollis, of Great Grimsby, in Lincolnshire, was a colonel in the service of Charles the First, and by no means one who could be termed a superstitious man, even in his own day. He professes to have received the tale from Mr. Liveman Rampaine, minister of God's word at Great Grimsby, in Lincolnshire, who was household chaplain to Sir Thomas Munson, of Burton, in Lincoln, at the time of the incident.

‘In the year 1631, two men (inhabitants of Burton) agreed betwixt themselves upon St. Mark's eve at night to watch in the churchyard at Burton, to try whether or no (according to the ordinary belief amongst the common people) they should see the Spectra, or Phantasma of those persons which should die in that parish the year following. To this intent, having first performed the usual ceremonies and superstitions, late in the night, the moon shining then very bright, they repaired to the church porch, and there seated themselves, continuing there till near twelve of the clock. About which time (growing weary with expectation and partly with fear) they resolved to depart, but were held fast by a kind of insensible violence, not being able to move a foot.

About midnight, upon a sudden (as if the moon had been eclipsed), they were environed with a black darkness; immediately after, a kind of light, as if it had been a resultancy from torches. Then appears, coming towards the church porch, the minister of the place, with a book in his hand, and after him one in a winding-sheet, whom they both knew to resemble one of their neighbours. The church doors immediately fly open, and through pass the apparitions, and then the doors clap to again. Then they seem to hear a muttering, as if it were the burial service, with a rattling of bones and noise of earth, as in the filling up of a grave. Suddenly a still silence, and immediately after the apparition of the curate again, with another of their neighbours following in a winding-sheet, and so a third, fourth, and fifth, every one attended with the same circumstances as the first.

These all having passed away, there ensued a serenity of the sky, the moon shining bright, as at the first; they themselves being restored to their former liberty to walk away, which they did sufficiently affrighted. The next day they kept within doors, and met not together, being both of them exceedingly ill, by reason of the affrightment which had terrified them the night before. Then they conferred their notes, and both of them could very well remember the circumstances of every passage. Three of the apparitions they well knew to resemble three of their neighbours; but the fourth (which seemed an infant), and the fifth (like an old man), they could not conceive any resemblance of. After this they confidently reported to every one what they had done and seen; and in order designed to death those three of their neighbours, which came to pass accordingly.

Shortly after their deaths, a woman in the town was delivered of a child, which died likewise. So that now there wanted but one (the old man), to accomplish their predictions, which likewise came to pass after this manner. In that winter, about mid-January, began a sharp and long frost, during the continuance of which some of Sir John Munson's friends in Cheshire, having some occasion of intercourse with him, despatched away a foot messenger (an ancient man), with letters to him. This man, tramling this bitter weather over the mountains in Derbyshire, was nearly perished with cold, yet at last he arrived at Burton with his letters, where within a day or two he died. And these men, as soon as ever they see him, said peremptorily that he was the man whose apparition they see, and that doubtless he would die before he returned, which accordingly he did.' 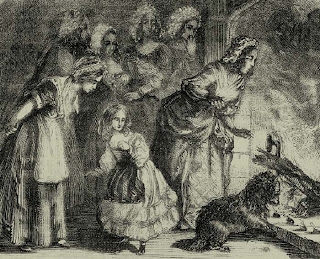 It may readily be presumed that this would prove a very pernicious superstition, as a malignant person, bearing an ill-will to any neighbour, had only to say or insinuate that he had seen him forming part of the visionary procession of St. Mark's Eve, in order to visit him with. a serious affliction, if not with mortal disease. Of a similar tendency was a custom indulged in among cottage families on St. Mark's Eve, of riddling out all the ashes on the hearth-stone over night, in the expectation of seeing impressed upon them, in the morning, the footstep of any one of the party who was to die during the ensuing year. In circles much given to superstition, great misery was sometimes created by a malicious or wanton person coming slily into the kitchen during the night, and marking the ashes with the shoe of one of the party.

St. Mark's Eve appears to have enjoyed among our simple ancestors a large share of the privileges which they assigned to All Saints' Eve (the Scottish Halloween.) In Poor Robin's Almanack for 1770, occurs this stanza:

Until lately, St. Mark's Day was marked at Alnwick by a ridiculous custom, in connection with the admission of freemen of the common, and described as follows: 'The persons who are to receive this privilege march on horseback, in great ceremony, dressed in white, with their swords by their sides, to the common, headed by the Duke of Northumberland's chamberlains and bailiff. Arrived at the Freemen's Well, a large dirty pool on the border of the common, they all deliberately walk into and through it, coming out on the other side begrimed with mud, and dripping all over.

On St. Mark's eve, at twelve o'clock,
The fair maid will watch her smock,
To find her husband in the dark,
By praying unto good St. Mark.'

We presume that the practice was to hang up the smock at the fire before going to bed; the rest of the family having retired, the anxious damsel would plant herself to wait till the resemblance of him who was to be her husband should come in and turn the garment. The divination by nuts was also in vogue. A row being planted amongst the hot embers on the hearth, one from each maiden, and the name of the loved one being breathed, it was expected that if the love was in any case to be successful, the nut would jump away; if otherwise, it would go on composedly burning till all was consumed:

If you love me, pop and fly,
If not, lie there silently.'

Then hastily changing their clothes, and having comforted themselves with a dram, they make a round of the common, return into the town, where a ceremonial reception by fantastically dressed women awaits them, and end by calling at each other's houses, and imbibing more liquor. It is alleged that this singular procedure has reference to a visit which King John paid to Alnwick. Having been "laired" in this pool, he punished the inhabitants for their bad roads by imposing upon them, in the charter of their common, an obligation each to subject himself, on his entry, to the same filthy ablution.' Alnwick common lands being now enclosed, this absurd custom is abolished. The last time the freemen passed through the well was April 25, 1854.