Ashmore is located in an area of chalk downland know as the Cranborne Chase.  One of the highest villages in the south of England and the highest in Dorset it lies 700 feet above sea level.

One of the major problems for hilltop settlements like Ashmore was that of water supply.  The chalk drained the water away, so to preserve water the hilltop settlers dug holes in the chalk and lined them with clay to retain water.  These ‘Dew Ponds’ provide water for livestock grazing on the hills or on their way to markets where a natural supply of surface water may not be have been readily available. Few remain today and Ashmore village has grown up around one of the oldest and most famous ponds in the country. Even the villages very name is mentioned in the Domesday Book  as ‘Aisemere’ derived from the Old English ‘aesc and ‘mere’ meaning “pool where the ash trees grow’.

Due to the villages height above sea level the relationship between evaporation and condensation was such that very little water was lost to evaporation.  It is seldom dry even in the hottest season.

However occasional there have been rare occurrences when the pond has dried out completely.  Edward William Watson, in his 1859 publication "Ashmore, Co. Dorset: a history of the parish with index to the registers, 1651 to 1820" writes an account of the time when this happened and the   traditional village custom associated with it.

“The great pond, from which the village takes its name, (for Ashmore is a corruption of Ashmere, little more than three hundred years old ; Ashmeer occurs in a will of 1698) sixteen feet deep opposite the Rectory, has nothing to equal it among the chalk downs of the neighbourhood, nor indeed in all the down country of Wiltshire and Dorsetshire. In all probability, however it may have been enlarged, its beginnings are natural ; it must be a swallow-hole, like those in the Yorkshire limestone. It rarely fails, though it is only fed by rain water. Perhaps, on an average, it is dry once in twenty years; and then the villagers, by ancient custom, hold a feast. Cakes are baked, and eaten round the margin and in the bed of the pond ; and the farmers haul out the hundreds of cart-loads of mud which have accumulated on the bottom, and lay them on their land. By a curious coincidence, the pond happened to dry, and the feast was held, in 1887, the Jubilee Year."

In 1956, this old custom was revived by Peter Swann, as a folk dance festival called the 'Filly Loo'. With the cooperation of the Ashmore Folk Dance Club and guests from Warminster, Westbury and other villages in Dorset and Wiltshire the festival has been traditionally held on the Friday evening nearest to the Feast of St. John the Baptist or Midsummer's Day - 24th June.

The festivities begin when popular Folk and Celidh Band 'Hambledon Hopstep Band' begins to play, calling the villagers out to take part in the first dance, led by a Green Man. Dancing continues throughout the evening, with the North Dorset childrens dance group 'The Steps in Time' and the White Horse Morris from Wiltshire 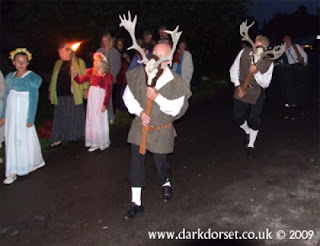 By dusk, the celebrations reach their climax with the Abbots Bromley Horn Dance. This is a torch lit procession with six antlered deer-men and four other colourful costumed characters: a Maid Marion, a bowman, a hobbyhorse and a fool.

The procession and dance is accompanied by a haunting solo melody in a minor key, which is very atmospheric. The celebration finishes with the torches in the ground around the pond and every reveller joins hands around the large village pond for a final dance.

The Woman in White

The origin of the name, ‘Filly Loo’, is an enigma, Some suggest that it is name after the one of the original instigators of the festival, a Louis Rideout, known as ‘Filbert Louis’. While others suggest it was originally held to celebrate the end of the cultivated hazelnut harvest in Ashmore. ‘Filbert’ being another name for hazelnut is derived from the name of St. Philibert, a Frankish abbot whose commemorative feast day falls on August 22, the date by which hazelnuts were supposed to start ripening.

In folklore, water has a long history of supernatural belief and is often believed to be passageways for ghosts and spirits to enter the physical world.  Lakes and rivers are the dwellings places of host of water entities, gods, goddesses, monsters, nymphs and faeries, some of whom are guardians of the community's water supply, which usually consisting of a spring, stream-fed fountain, or well.  A common name associated to holy wells and springs is 'Lady Well', as wells once dedicated to pagan goddesses and their priestesses were rededicated and turned into to holy shrine the Virgin Mary under Christianity. Longstanding customs exist for propitiating the water spirits with offerings tossed into the waters.  Wishing wells and springs with healing properties derive from this belief and are often venerated around Midsummer or St John’s Day often marked by dressing their wells and springs with garlands of flowers.

Such water sources are often connected with sightings of a White Lady, a ghostly figure, perhaps of the displaced water spirit or goddess.  Hence ‘Filly Loo’ may be a corruption of the French ‘La Fille de l'Eau’, which means ‘Maiden of the Water’.   As near to Ashmore village there was once a well with an ash tree growing above it, called Washers Pit. Two stories are connected with it, one telling of a White Lady who haunts the well and the nearby road, and the other recounting how the cook from the big house had a prophetic dream and rode out to this spot, coming in time to save a lady dressed in white who was hanging from the ash tree. This story is recounted by Edward William Watson, in his 1859 publication "Ashmore, Co. Dorset: a history of the parish with index to the registers, 1651 to 1820"

"Though Robert Barber, the High Sheriff of 1670, made his home at Tollard, his son returned to Ashmore, which the family regarded as their chief seat. In Ashmore Church, in a vault under the chancel, almost all of them are buried. Soon after the place was purchased, the manor house must have been built. About half of it is now standing. Formerly a wing ran at right angles to the main building on the north-west side, and the south-east end was flanked by two octagonal towers, though there seems some doubt whether both of these were ever completed. There was another octagonal tower, or large stone summer-house, in the comer of the gardens nearest to the church ; and on the down, now ploughed, overhanging Washer's Pit, a building of the same kind called Barber's Folly, from which the field and down are still named.

With the hollow below the Folly, where the road to Fontmel crosses the bottom, a legend is connected, well known in Ashmore, into which the name of the Barbers has been introduced, though the story must be far older than their time. It runs that a Squire Barber, or perhaps his daughter, for the tale is variously told, was warned in a dream on three successive nights, or else three times on the same night, that some one was in distress at Washer's Pit. The person warned woke the  household, and asked for a volunteer to go down to the place. No one would venture, except the cook. Her master gave her his best hunter for the ride, and she went forth to find a lady in white hanging by her hair from an ash tree over the well, now closed, at Washer's Pit. She released the victim, and carried her back on the horse to Ashmore(One version relates that she was pusued, but blew her hom and leaped the horse over Spinney's Gate, a feat which her pursuers could not perform).


For her courage she was rewarded with the little holding called Mullens', after her name. But the Mullens family had been settled in Ashmore long before the Barbers ; and another version tells that the daughter of the house, and not the cook, went on the quest. What became of the rescued lady, who she and her assailants were, is not recorded. And it is only fair to state that Dr. Chisholm, the younger, was in the habit of telling the story as of one of the servants at the manor farm being nearly murdered at this spot, and a fellow-servant being warned in a dream to help her. Perhaps Dr. Chisholm had rationalised the story; he told it as of his own or his father's time.


Connected with the same ground as this legend and that about the barrow at Folly Hanging Gate, is another of a woman in white, who has been seen and felt brushing by them, within the last fifty years, by travellers between Spinney's Pond and Washer's Pit. I have heard it connected with the barrow, but the true form of that story is the Gappergennies (see related page - Gabbygamies) ; and the affair at Washer's Pit ended too happily to generate a ghost. This must be some third and independent legend. It is curious that in a parish full, as Ashmore is, of dark and lonely places, no other neighbourhood than these few yards on the road to Fontmel should have its story."